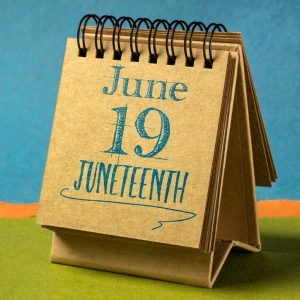 For almost 150 years, Black Americans have been celebrating Juneteenth. It originally started in Texas. As former enslaved people left their Texas homes (often by force) and migrated to other states, the celebrations spread and took on all the importance of a second American Independence Day.

Juneteenth commemorates the date when enslaved men and women in Galveston, Texas, finally learned that President Lincoln had issued the Emancipation Proclamation freeing them from slavery almost two years earlier on January 1, 1863.

When the Civil War finally ended in 1865, enslaved people in Texas did not know they were free. Former Confederate officials ignored orders to abolish slavery in Texas and allowed plantation owners to decide when to tell their slaves that they were free men and women. Many owners forced people to work through the end of the harvest before disclosing to them that they were free people.

Their status essentially stayed the same as far as they knew—they remained slaves.

The federal government sent Maj. Gen. Gordon Granger to Galveston, Texas. He arrived with 2000 soldiers on June 19, 1865, to deliver a message to the former Confederate holdouts.

The message: Slavery has been outlawed in former Confederate states. And the enslavers in Texas had better comply.

As National Geographic notes, “At the stroke of midnight on January 1, 1863, the Emancipation Proclamation came into effect and declared enslaved people in the Confederacy free—on the condition that the Union won the war. The proclamation turned the war into a fight for freedom and by the end of the war 200,000 Black soldiers had joined the fight, spreading news of freedom as they fought their way through the South.”

In 1872, seven years after Granger announced slavery was outlawed in formerly Confederate states, a group of Black ministers and businessmen raised enough money to purchase 10 acres of park land in Texas. The land, now known as Emancipation Park, offered surrounding Black communities a safe place to celebrate Juneteenth. Since then, several communities purchased private land for parks in which to celebrate with many bearing the same name, Emancipation Park.

During the Civil Rights movement in the 1960s, Juneteenth celebrations waned a bit. But now, the day’s raison d’être is fueling a new movement battling old prejudices that the Civil War could not erase. Racial justice, voting rights, poverty, education, and systemic racism have become front-and-center issues that all Americans must face yet again.

Adding a new federal holiday commemorating the date enslaved people in Texas heard the news that they were liberated is symbolically a huge step forward for our country. The fact that the law passed unanimously is minimally newsworthy without passing a voting rights bill that eliminates the Jim Crow era laws designed to keep Black people in slavery-like status. We must also immediately pass substantive laws that acknowledge and actually right the wrongs of our past.

The recent deaths of George Floyd, Ahmaud Arbury, Breonna Taylor, and others sparked a revolution. People around the world have begun to open their eyes to the plight of Black people in America. While the call-to-action regarding #BlackLivesMatter seems new, Black Americans have been fighting for justice since this country’s inception.

Yes, there’s still so much work to do, and it is so important for us as Americans to celebrate Juneteenth as a beautiful expression of hope and resistance.